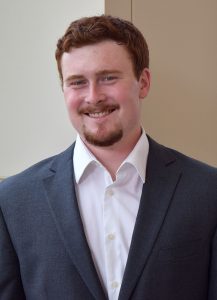 Matthew’s music “brings folks together, so they can be delighted and challenged and puzzled and amused, all at once.”  From Baltimore, Maryland, Rafferty works in a variety of media, writing for musicians and ensembles and sound art installations of all sizes and shapes.  His pieces have been performed around the US and Europe.

He graduated from Vanderbilt University last year, where he studied composition with Michael Slayton, Stan Link, Michael Rose, and Michael Kurek.  He also studied composition in Vienna with Gabriele Proy and Nancy van de Vate.  He was the recipient of the 2017 Calhoun Composition Award.  Matt studied conducting with Robin Fountain and conducted the Vanderbilt Symphony Orchestra and the Vanderbilt Ballet Orchestra.  He is the music director of the Vanderbilt Ballet. Matt currently lives and works in Nashville, Tennessee.  His website is under construction, but for now you can hear a few of his pieces on Soundcloud: https://soundcloud.com/matt-rafferty.