Mysteries of the Loire Valley: Azay-le-Rideau 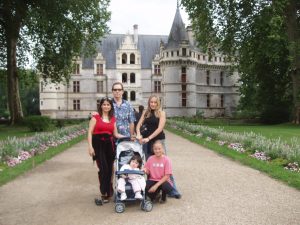 One of the benefits of living part-time in the Loire Valley (during summers primarily) is discovering little known historical facts about nearby areas. Sometimes those facts are humorous, other times fascinating and occasionally tragic. In most instances, historical tidbits are readily shared by townsfolk to inquiring tourists. However, sometimes the history is dark, a source of embarrassment and kept hidden by the locals. In those cases, it may only come to light through investigative research or an accidental disclosure by a villager. One of the villages near our summer home contains such a dark secret, one that the vast majority of tourists will never learn about. The village is Azay-le-Rideau, just twenty minutes away from our summer home. It’s the village with a fairy-tale castle surrounded by a moat in the heart of the Loire Valley—one of the most beautiful and popular chateaus in the region.

Several times, we have taken tours of the chateau (usually with friends or family). The tour offers the usual fare: visit to the chateau’s main rooms, inspecting paintings and antique furniture, learning interesting facts about the dwelling’s history and its past inhabitants. In this tour, we learn that the chateau was built in the early sixteenth century on the bank of the Indre River. We hear how the site was acquired by Gilles Berthelot, Treasurer of the King of France’s finances and who was also, incidentally, the Mayor of Tours. Berthelot built the sumptuous chateau as his private residence, desiring it to reflect his power and status.

It took nearly ten years to build the chateau–truly an incredible feat of engineering as it was constructed on a small damp island surrounded by the Indre River. The builders had to place deep foundational stilts into the soggy ground in order to begin construction of the chateau. Rock for the chateau was transported a hundred kilometers away from Saint-Algnan. As one can imagine, building the chateau cost an enormous fortune and put a strain on Berthelot’s cash reserves. As the castle was nearing completion, rumors began to swirl that Berthelot had been dipping into the king’s treasury to help finance his extravagance. Shortly after the chateau was completed, Berthelot’s cousin, who was also involved with the king’s finances, was executed for financial irregularities. Berthelot apparently assumed he might be the recipient of a similar fate and fled France just two years after the chateau was completed. Ironically, with his duties as the King’s treasurer, which required his attendance in Paris, Berthelot rarely dwelled in the chateau before his exile. Berthelot’s financial peccadilloes are rarely touched on, if at all, during a tour of Azay’s chateau. But, that is not the dark secret of which I write. 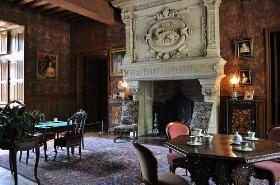 Azay-le-Rideau’s name is of relatively recent origin (by European standards), dating back to just the eighteenth century. Before, its name was Azay-le-Brulé. And, there was a different chateau on the site than the one erected by Berthelot. The former chateau contains an ignominious past, one that town-dwellers choose to conceal. A fortress was originally erected on the same site in the twelfth century. During the Hundred Years’ War, the chateau met its doom.

In 1418, the future king of France, Charles VII (called the dauphin: heir to the French throne) was forced to flee from Paris, after Burgundian soldiers attempted to capture the city. He fled to Bourges, a city loyal to him and the Armagnacs. On his southward march he passed by Azay, which was loyal to the Burgundians, the opposition. The Burgundian soldiers manning the castle taunted the dauphin and his army as it rode past, foolishly believing that their fortress was impregnable and of little interest to the passing army. The insults from the Burgundian soldiers intensified until the future king had finally heard enough. He ordered his army to lay siege to the castle. They set the fortress on fire and all of the inhabitants of the village died in the blaze (350 people) as the chateau was burnt to the ground. This is the same Charles whom Joan of Arc rode to see at Chinon (a city near Azay) in February of 1429. Charles wanted to make sure that Joan’s claims of visions and angels was real and disguised himself as a courtier, standing in the midst of a crowd. Joan immediately recognized him, despite the king’s many pretensions that he was just a commoner. The rest is history, as Joan of Arc led the army of Charles VII to a great victory at Orleans and Charles VII was soon after crowned the king of France in Reims in July of 1429. 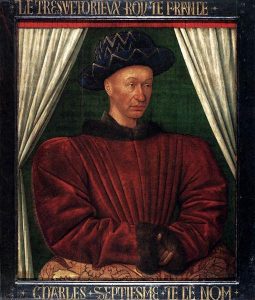 In the aftermath of the tragedy at Azay, the city became known as Azay-le-Brulé, which literally means “burned Azay.” This name remained for hundreds of years, commemorating the fateful event.

As the years passed, the Azay townsfolk tired of the constant reminder of their dark past and decided to a choose a new name for the city. They renamed the city, “Azay-le-Rideau.” The word “rideau” in French means “curtain.” Essentially, the townsfolk elected to place a curtain over their past and cover-up the sordid event. Were it not for the internet, tourists of Azay would have little means of discovering the 600 year-old brutality which occurred on such a lovely setting. It was not to be remembered, spoken of, or commemorated.

I accidentally learned of Azay’s dark past during our first visit to the chateau seventeen years ago, when I kept prying the tour guide for historical information that preceded chateau’s erection. The tour guide told me the secret in a hushed tone, outside of the hearing of other tourists. It was an obvious source of embarrassment and something they preferred not to publicize. Today, Azay-le-Rideau is one of the most beautiful and popular chateaus in the Loire Valley, but with a curtain drawn over its tragic past. 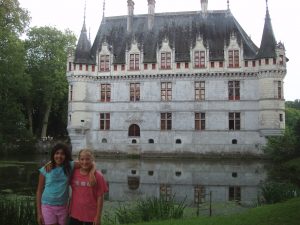 During our summers in the Loire Valley, we often try to imagine what it was like to have lived there in the past. But some of the past would definitely not be worth reliving.

In future posts, I will share other mysteries which we’ve come to know by spending summers in the glorious Loire Valley.