I mentioned in an earlier blog the late John Ogden’s summation of Chopin’s Quatrième Ballade. Since I have been spending an hour or two a day on this composition, I have come to appreciate his words more than ever. He said: “[It is] the most exalted, intense and sublimely powerful of all Chopin’s compositions… It is unbelievable that it lasts only twelve minutes, for it contains the experience of a lifetime.” Since the late John Ogden was one of the great pianists of the twentieth century, his assessment of the ballade cannot be taken lightly. 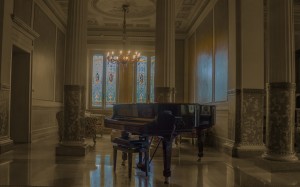 Chopin wrote his ballade in either 1842 or 1843, dedicating his work to Madame la Baronne C. Nathaniel de Rothschild, who introduced Chopin to the Paris aristocracy. It has been said that Chopin’s inspiration for the ballade came from Mickiewicz’s “Budri,” a story about a father who sent his three sons to fight the enemy, but who returned from battle with three wives. However, there is little similarity in the music to Mickiewicz’s tale. One must look deeper for Chopin’s inspiration.

Learning to play the ballade has been a memorable and unique experience. Each measure of the piece is almost a composition unto itself. Many of the measures require much attention and study. While there are some sections that are relatively easy, most of the composition is extremely challenging. Moreover, there is little repetition, which is unusual for a composition of this length.

The ballade contains numerous episodes, each with its own unique signature. There is a climax of arpeggios, followed by an acceleration of chords that ends in fury and volume at triple forte, a volume infrequently encountered. After a silent pause, the composition goes to the other extreme: “pp.” If the battle scene in “Budri” is believed to be the inspiration, then the resulting calm constitutes the relief and recuperation from the fight after a raging battle. Yet, before we can enjoy the calm, the turbulent coda thunders through the remaining two and a half pages, evoking a scene of horses running wildly through a forest. Then, just as life sometimes ends suddenly, the composition comes to an abrupt end, and it is over. 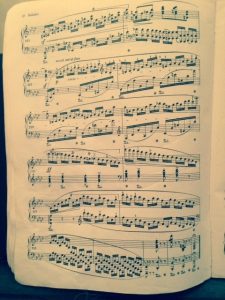 Once in a Lifetime Experience

So, what is this experience of a lifetime that John Ogden references? It’s a complex story of melancholy, struggle, heartbreak, triumph, calm and conflict. It is what drew me to the piece the first time I heard it: the diversity of music, complexity, simplicity and beauty. It is a composition that never grows tiresome.

In some strange way, it may have been Chopin’s own autobiography. His life began peaceably enough and as he grew into manhood, he experienced sprinkles of happiness in the midst of despair, a melancholy hope to return to a simpler existence, but erupting instead into a turbulent relationship with Amantine Dupin, a French writer known as George Sand. He was in the midst of this troubled, complex relationship, when he wrote the piece. And, perhaps Chopin already knew, when he wrote the piece, that in just a few short years his life would end suddenly.

Learning to play the ballade has helped me better understand John Ogden’s words and it has certainly increased my awe and appreciation for Chopin’s genius. When I perform it on November 13th at 2:00 p.m. in the Carlsbad City Library, I hope that I will be able to convey that awe and appreciation to the audience.

Learning the piece has been for me one of life’s great experiences, one that I will never forget.