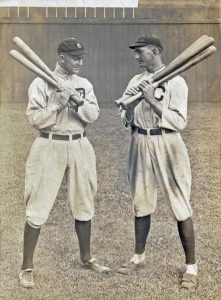 In 1911, Ty Cobb had a legendary season in his quest for a fifth consecutive batting title, as depicted in Episodes 5 and 6 of Baseball Immortal. For most of that year, Cobb’s batting average was at least sixty points higher than anyone else’s. In fact, as late as July 15th (more than half-way into the season), Cobb was batting .448. The American League’s new sensation, Joseph Jefferson Jackson (who became known as Shoeless Joe Jackson), caught fire in the summer and reached .400 on August 8th, gaining forty points on Cobb. Episode 6 recounts the mental gymnastics and guile that Cobb devised to help put Jackson off his game.

In his autobiography, Cobb recounts the events essentially as they are described in Episode 6. It was a story Cobb repeated for years after his playing career was over. When confronted with the embarrassing incident many years later, Jackson denied it ever happened; in fact, Jackson allegedly said “A story you hear from time to time that Ty bulldozed me by getting my goat in a conceived plan to ignore me in Cleveland in that important final series is just a lot of hooey. Ty was able to beat me out because he got more hits than I did.” Many authors and researchers have now concluded that the story was concocted by Ty Cobb, to further his image as a devious and ingenious competitor. In writing my book, I decided to take a deep dive into the controversy and determine whether it was worthy of inclusion in Baseball Immortal.

One post I recently noticed online (from “The Naked Whiz Website Store”) argues that the encounter never happened. In support of his thesis, the author offers the following evidence: (1) that there was no six-game season-ending series between Detroit and Cleveland, which Cobb recalled in his autobiography; (2) Ty Cobb didn’t even play in the last three games of the season; and (3) at no time during 1911 season did Jackson ever lead Cobb in batting.

Let’s examine each of the three points and see if they truly de-bunk Cobb’s story. The first point is true: there was no season-ending six game series between Detroit and Cleveland. However, as noted in Episode 6, there was a three game home-and-away series between the teams in mid-September, 1911. The second point is that Cobb sat out the last three games of the season, which is of no relevance, since Jackson sat out the last two games of the season, as well—and by this time, Cobb had such a large lead that Jackson could never have overcome it in a season-ending short series. It is entirely possible that Cobb didn’t remember (many years later when recounting the story) exactly when the series took place, nor how many games were in the series.

The final point raised by the Naked Whiz author is that, at no time, did Jackson ever lead Cobb in batting. That is true. However, if one analyzes the batting race between the two players, it is easy to see why Cobb would have become increasingly concerned about Jackson surpassing him in average. Below is a summary of key dates in the batting race from June to September:

[Remember, Cobb was scarred by the 1910 season (See Episode 5), in which Cobb had a seven-point batting lead over Napoleon Lajoie entering the final day of the campaign. St. Louis Browns, the worst team in baseball, conspired to enable Lajoie to go 8 for 8 in the final day of the season (by insisting that their rookie 3rd basemen play deep, thereby allowing Lajoie to reach first safely on a bunt seven consecutive times). It is understandable why Cobb did not want to see the same shenanigans play out in 1911.]

If we look at the above display, we see an incredible surge by Jackson on Cobb’s lead, particularly during a 24-day period from July 15 to Aug 9, 1911—incredibly, Jackson makes up nearly 40 points in that three-week span. It is understandable how in mid-September, with Jackson now trailing by only 12 points, that Cobb would have concocted a scheme to help derail Jackson. It matters not at all, that Jackson never led in the batting race, since it is clear that Jackson was closing fast, and had made up 54 points by the time of the Detroit-Cleveland series in mid-September, 1911.

The question must also be asked: “Why would Cobb manufacture the story?” Cobb already had a legacy chock-full of larceny and chicanery. Did he really need to embellish it any further?

I will let the reader decide, after they read Episodes 5 and 6.