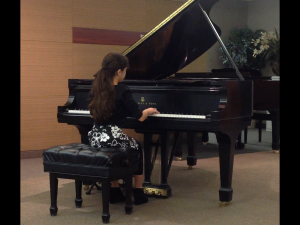 Two weeks ago, my two young daughters (11 and 13) participated in the annual Musical Arts of Orange County piano competition at Cal State Long Beach. This is the third year they have competed. Since they did well in the past two competitions, we had high hopes for them this year.

I always tell my daughters that the best part of performing in public comes once you’re done and you begin receiving the many compliments from a grateful audience. However, in my experience, there are always one or two people who come forward expressing their profound regret for having abandoned the piano in adulthood, after devoting many long years to practicing as a child. But for the grace of God, I would be numbered among that large contingent.

My Background in Piano

I come from a family of seven children, where both mother and father worked full-time. We were a family of modest means living in Salt Lake City on the avenues. Despite our modest circumstances, I was blessed with a magical childhood—a topic I’ll reserve for future blogs. My mother was an outstanding pianist and my first piano teacher (my father also played until a hunting accident in his early 20’s restricted the use of his left hand). As a full-time elementary school teacher, I have often marveled that she found the time to make every one of her children feel so special and so loved, and particularly how she ever found the time to teach me the piano. 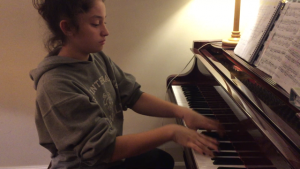 After a year or two, I graduated to another teacher who lived half a block away. I took lessons in her home, but I remember little of this teacher. In hindsight, she was probably priced right and convenient. The lessons were sporadic and infrequent, nevertheless, I continued to progress.

We moved from the avenues to an area near “Sugarhouse” in south Salt Lake when I was 11 years old. At first, I was excited to move, looking forward to making new friends and discovering new adventures. But the newness wore off after a few months and I began missing my old friends and my old neighborhood. I also became more involved in sports, but continued practicing the piano. Soon after our move, my parents found a new piano teacher, a real piano teacher with a studio in downtown Salt Lake. At age 12, I would take the bus from our home to his studio at night, once a week. The bus ride took perhaps thirty or forty minutes each way. Unfortunately, I was not a very good pupil.

Practicing the piano was low on my list of priorities—after baseball, hanging out with friends, and a host of other diversions. I remember several times my piano teacher reprimanding me for not practicing at all between lessons, telling me: “I hope you understand that it’s a sacrifice for your parents to pay my fee to teach you the piano. When you don’t practice, they’re wasting their money.” It made me feel guilty, and I would practice the piano a couple nights in a row afterwards; but, the guilt would quickly fade and I would return to my wayward habits.

There were several times when the only practice between lessons took place on the bus on the way to my lesson. I would open the sheet music once I found a seat on the bus and began practicing as the bus lurched forwards and back, side to side, stopping every couple of blocks. Using the seat cushion as a keyboard, I would plunk out the notes trying to imagine the sound my fingers were making. A couple of times it even worked, with my teacher complimenting me on my progress; but, the vast majority of time, the bus practice did little to advance my mastery of the compositions. At age fourteen, the lessons stopped. To this day, I’m not sure why. It could have been that my teacher informed my parents that it wasn’t worth the investment. Or, it may have been that participating in sports began to require more of my time. Fortunately, I never totally strayed from the keyboard, improvising tunes or playing by ear. In addition, I was appointed the pianist for the early morning church service and accompanied the congregation’s hymns. I was even called upon occasionally to perform a solo during the main church service.

After completing law school and having lived several years without a piano, an acquaintance asked if they could store a piano in my home for a year or two. Although I hadn’t played for several years, I found myself sitting down at the keyboard at idle moments and playing pieces I had memorized as a youth or composing something new. It was about this time, my father sent me a birthday gift (which was a rarity, since birthday gifts always came from my mother). There was a record of Mussorgsky’s “Pictures at an Exhibition,” along with, to my surprise, the piano music. I placed the music on the piano stand and started playing the opening movement. Having been blessed with a teacher who stressed the importance of sight-reading, I was able to get through the first Promenade without much difficulty. And I gradually found myself spending more time at the keyboard.

A few months later, I remember hearing Chopin’s Revolutionary Etude on the radio, a piece I always believed to be beyond my meager talent. Nevertheless, I started working on the opening page and in a couple of months had the piece memorized and was impressing friends and family with my newly discovered virtuosity. From that point to the present, the piano has been an important part of my life. I never fail to thank my mother for getting me started and pushing me long enough to the point where I began to play for pleasure. 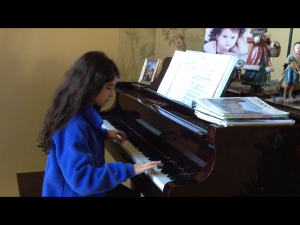 When my two young daughters were born, my wife and I decided that we were going to get them started on the keyboard at an early age. Numerous parents struggle with their children; at first it’s easy, the kids usually enjoy the progress they quickly make, but soon tire of the constant practice. I told my wife that if we really wanted them to become good pianists, we could never give up on them, even when it became enormously frustrating and when they said they hated practicing. We have tried to give them the best instruction money can buy. They have learned piano theory and other fundamentals–the correct way to place their fingers on the keys, the correct way to depress a key, correct posture, correct fingering, etc. Both girls made good progress with their first teacher and when the time was right, we changed teachers and found a lovely Asian lady who has taught them how to play with wonderful expression and dynamics, at the same time instilling a love for music.

Back to the Competition!

Back to our daughter’s piano competition: For the first time in years, my wife attended—it’s difficult for her to be present when our daughters compete, because she gets so nervous. To complicate matters further, both girls were scheduled to perform at the same time in different auditoriums, so I accompanied our younger daughter and my wife the older. The younger daughter, who just finished fifth grade, was in a very competitive group. Most of the contestants were exceptionally talented. When it was her turn to perform, she played beautifully and I was so proud of her. After all the contestants performed, we waited in the reception area for the preliminary results. It takes the judges thirty minutes or so, to post the top three performers (although we don’t yet know their order) and those deserving of honorable mention. When I saw my daughter’s assigned number listed as one of the top three, I was thrilled and, to her mortification, twirled her around in the air. My older daughter’s group took longer, because their pieces last longer. When my older daughter arrived, my wife was thrilled with how well she had done and a short time later, we found to our mutual delight that my older daughter had also qualified as one of the winners from her group (she was not twirled around).

An hour or two passed before the Awards Ceremony began in the large auditorium, where the placement of the top three winners in each group would be announced. Two years before, our older daughter had won first place and our younger daughter third. Last year, our oldest (with a splint on her thumb) came in second and our younger daughter third again. We were all ears waiting for the announcement, knowing the winner of each group would come forward and perform for the much larger audience one of the two pieces they have played in the competition.

After several younger divisions, my younger daughter’s group was announced. The third place winner was first identified. My daughter smiled—at least, she wouldn’t receive third place for the third straight year. She turned to me and said, “I hope I don’t win, daddy, so I don’t have to play.” Well, her wish was granted. She was awarded second place. We heartily clapped, very proud of the way she played far more than the recognition she received. 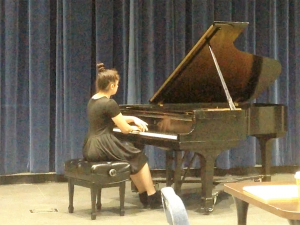 Soon after, my older daughter’s group was announced. Once again, another contestant was recognized for third place. My daughter held her breath. Unlike our youngest daughter, she wanted “first place,” anxious to play Debussy’s Doctor Gradus ad Parnassum. Alas, her name was announced as the second place winner for the second straight year.
On the drive home, my wife and I had a warm feeling, knowing that our daughters had done their very best and both girls carried home another trophy to commemorate their outstanding performance.

Sometimes second place can be better than first, as both girls committed to work harder next year, and come away with the top prize. 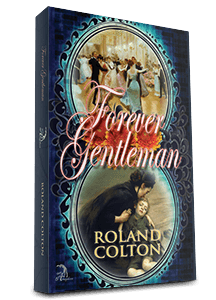