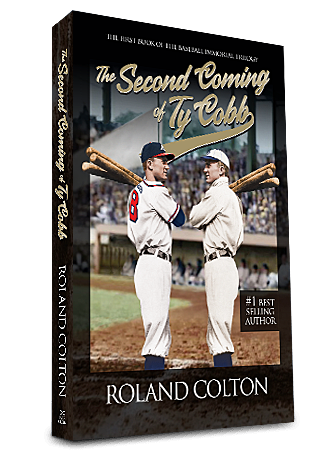 Colton is the author of the “Baseball Immortal” trilogy. The first book of the trilogy was serialized by Major League Baseball during COVID. He is also the published author of Forever Gentleman, a sweeping, historical nineteenth-century saga of suspense, romance, mystery, and music.

“Forever Gentleman” received critical acclaim, which led to the subsequent creation of a music e-Version of the book, enabling readers to listen to the music described in the book, as the story unfolds. The music e-Version is available from Apple Books.

Colton has been a passionate baseball fan all of his life and Baseball Immortal celebrates that passion. He lives with his family in Southern California and France.

Have you ever wondered how immortal superstars from baseball’s past would fare in today’s game?

Well, Roland Colton’s new novel, Baseball Immortal, answers that question… or does it?

Is the man who awakens in a present-day Georgia hospital, after suffering a nearly fatal hit-and-run accident, truly the legendary Ty Cobb (who has been inexplicably transported forward in time), or is he a man suffering from severe psychosis and delusions of grandeur, who has hijacked Cobb’s identity as his own? The book begins in 1911, with the Detroit Tigers on the calamitous end of a humiliating twelve-run deficit, when Cobb enters center stage.

Ultimately, the man who claims to be Ty Cobb displays startling baseball talent, even gaining entree into the major leagues. What ensues is a baseball season on steroids, as Cobb’s second coming transforms the game of baseball. A sport that is often described as “boring” by the masses becomes anything but when Cobb is present.

Numerous action sequences on the field of play, never seen or before imagined, depict events that will startle and enrapture the reader. Cobb is attacked in bars, attempts are made on his life, he becomes a fugitive from justice and he is suspended multiple times for his retaliatory and headstrong play. Buckle up for the ride of your life!

This book has been extremely popular with readers and reviews. What inspired you to write this exceptional book?

I have always wondered how immortal superstars from baseball’s past would fare in today’s game. Baseball is the only major sport where such comparisons can realistically be made since modern-day football players average a hundred more pounds of girth and basketball players six more inches in height than their early-day counterparts.

Size and brawn in baseball have never determined excellence, except when it comes to hitting the long ball or throwing hard; rather reflexes, vision and reaction time are far more critical.

Standing tallest among the great stars of yesteryear is Ty Cobb (who received more votes than even Babe Ruth in the Hall of Fame’s inaugural class). No one has ever approached Cobb’s lifetime batting average of .367 and he reigned supreme as the greatest base stealer during baseball’s first hundred years.

After conducting meticulous research into the ancient game and comparing and contrasting it with the modern game, this ages-old debate is finally answered by the story that unfolds in the Baseball Immortal trilogy.

In many ways baseball is a character in this book, what do you find so fascinating about this sport and its history?

Baseball is a timeless game of simplicity, symmetry, and skill. At its core, the modern game is virtually identical to the game played in the 1800’s: 3 strikes to an out, 3 outs to an inning, 9 innings in a game, and the distances on the diamond have remained unchanged since 1893.

America became obsessed with the sport soon after the War Between the States and every town across the nation boasted their own baseball team, competing with neighboring communities. The game reigned supreme until the middle of the twentieth century, when the pace and length of the game slowed, with games lasting twice as long as before.

The ancient game was one of cunning, deception, and batsmanship, whereas the modern game is ruled by power, strikeouts, and analytics. Nevertheless, baseball has survived this transformation and is still beloved by the masses.

The book is rich in character development. What are one of your keys for developing such intriguing and compelling characters?

When I create characters in my mind, they become real to me, with flaws, strengths, personalities and passions. As I begin writing a story, the characters drive the action, the plot, and its twists and turns, with very little pushing or prodding from me.

Readers will see frequent thought reflection by the characters in my books, because as the story develops, they are thinking before acting, and their actions are motivated by their internal thoughts and conflict. Writing about a character who claims to be the legendary Detroit star posed a new challenge; I had to be true to Ty Cobb’s complex dimensions and demons, which make him such a compelling and fascinating character.

While writing this book, did you learn anything new about yourself?

I think I learn something new with every book I write. I was surprised by how fascinated I became with the America that existed at the dawning of the twentieth century.

As I conducted a deep dive into the world of a century ago, by pouring over numerous archived newspapers, I became intrigued by not just ancient sporting events, but also the customs, dress, language, politics and world events of the day.

Consequently, my research went far beyond the game of baseball. That fascination remains, and I hope to, one day, write a book about this magical era in our country’s past.

This book has become such a hit with readers, do you have other books in the works you can tell us about?

Book 2 of the Baseball Immortal trilogy will be released in July of 2022, and Book 3 in October of 2022. Thus, fans of Book 1 will not have long to wait before the full story unfolds.

For those who have enjoyed Book 1, I can assure you that the story only gets better. As one of Baseball Immortal promotional banners stated (when the first book was serialized on Major League Baseball’s website during COVID), “Get ready for the ride of your life!”

Beyond baseball, is a book which will be released early next year, entitled Death’s Illusion. Death’s Illusion is a drama and mystery, full of unexpected twists and turns.

The story opens with a fully-clothed man seated in a bathtub, holding a loaded pistol to his head—his only way out to save the lives and future of his beloved wife and kids; he has much to live for, but he realizes he must sacrifice his own life for their sake.

What transpires is a story where truth and fiction merge, and the reader is never sure which is which, until the final page of the book.

When you finish a new book, what is your favorite drink to celebrate with?

Since I don’t partake of alcohol, it’s a tall, chilled goblet of Martinelli’s sparkling apple cider.

“BASEBALL IMMORTAL: The Second Coming of Ty Cobb” is available on Amazon by clicking here.