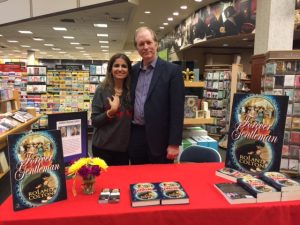 Earlier this month, we had a book signing at the Barnes & Noble store in Main Place Mall in Orange, California. This is a magnificent store; it consists of two floors and is certainly one of the largest bookstores in Southern California. It certainly makes good on Barnes & Noble’s promise to inspire people to “pursue their personal passions, cultivate their minds and nourish their dreams.”

It was a Friday night and the heavily decorated store signaled that Christmas was coming soon. A table had been set up for my signing on the ground floor between the main entrance and the coffee shop. I placed the usual posters of the book on the table. Barnes & Noble had ordered a large number of soft-cover editions and I brought a box of hard-cover books, too, just in case.

As the hour arrived, I sat down at the table. There was a good crowd in the store, but few ventured my way. After sitting idly at the table for ten or fifteen minutes, a lady came by and picked up the book. She indicated that she was traveling east to visit relatives and wanted a good novel to read. Naturally, I told her she had come to the right spot and I told her a little bit about the book and the research I had performed. She smiled and asked me to personalize the book, stating: “I can’t wait to start it.”

A dear family friend came by a few minutes later, bringing with her a couple of interested readers. In a matter of minutes, six more copies were signed and sold. Suddenly, there seemed to be a steady stream of people interested in hearing about the book. Over the next hour or so, nearly every book (soft-cover and hard) disappeared off the table. 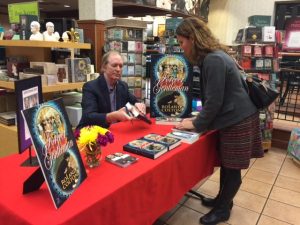 My lovely wife had been chauffeuring one of daughters from tennis to dance and arrived near the end of the signing. She looked at me quizzically: “What happened to all the books?” I smiled and replied, “historical novels are in this Christmas season.” When I told her how many books had been sold, she was astounded. In fact, she made me promise to arrange a book signing at the Aliso Viejo Barnes & Noble store near our home in the near future.

Excluding the book signing and concert held in Carlsbad City Library auditorium last month, the Barnes & Noble signing was by far the most successful so far.

Stay tuned for upcoming book signing after the New Year.