In this, my inaugural post, I thought I might share some of my thoughts and impressions in submitting my first novel, “Forever Gentleman” to book reviewers. I suppose most authors have some insecurity about how others will perceive their story and their writing style. There is naturally some trepidation among new authors about how the book will be received, especially from the very first reviewer.

I remember how I came to have the presumptuous idea to actually put words onto paper. There was a particular scene that had gradually taken form in my mind over a period of several months. As I would lie in bed, looking for calm before slumber, I would sometimes imagine the events unfolding, and even being a participant in the scene—it was a segment that I would have loved to have seen portrayed in a movie or mini-series. After having rehearsed the episode many times in various stages of slumber, I finally felt inspired to put the scene into words. On a lazy Saturday afternoon, with pen and paper, I devoted several hours composing what would eventually become part of Chapter 32. It seemed so arduous trying to put the incident into words. I struggled to find words that would describe the characters, the setting, the music and the mood. Hours later, after many crumpled sheets in the waste basket, there remained five or six handwritten pages, containing stricken words, corrections and added words inserted between lines and margins. I had utterly failed in my endeavor to find the right words, phrases and sentences and the result was a pathetic imitation of the story I wanted to tell. I remember thinking: “This is too hard. Well, at least I tried.” Writing a novel someday had suddenly vanished from my list of life’s goals.

Fast forward to six months later. I was rummaging through my home desk and happened upon the manuscript of “Chapter 32.” I chuckled to myself, thinking it would be interesting to see just how bad I writer I was. I began reading the pen-scratching and after a few paragraphs thought to myself: “Did someone re-write this?” Now, it wasn’t anything of great literary value, but it didn’t seem so woeful as I had recalled it being. It was still in my handwriting, so I was pretty certain it was my six-month old draft and not some interloper’s re-write. I remember thinking: “It’s not that bad. It tells the story well enough. In fact, I’d keep reading if there was more.” 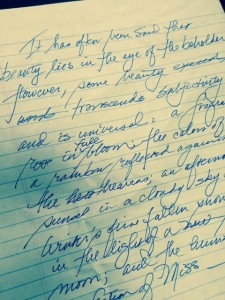 A few days later, I took up pen and paper again, and decided to write another scene—one again, that I had occasionally reflected upon: the opening chapter of the story. I vividly recall going through an experience eerily similar to my first attempt—it was too hard, the words didn’t flow, no one would possibly want to read this. Nevertheless, I devoted a good part of another week-end afternoon putting words on paper. Once again, I decided to abandon the project, angry at myself for wasting a beautiful afternoon. It was too tedious, too clumsy and now I was truly certain that I had fulfilled my daydream of writing the “great American novel”—well actually British novel, since that’s where the story took place. The new chapter went back into the desk with the old one, never to be seen or read again… or so I thought.

Another six months passed, and the same thing happened as before. Reading the opening scene, I found myself thinking: “It’s legible. There might be a soul or two, on the planet, that would take a mild interest in finding out what happens next.” Slowly, the words began to flow for Chapter 2, then 3, then 4, and so on. The writing gradually became easier—there were even times when I couldn’t get the words out fast enough.

Of course, the project took a great deal of time, involving many hundreds of hours of research. There was the first draft—where I got the story out—which took more than a year. Little did I realize that was just the beginning. Many re-writes later, I finally submitted the story to agents/publishers. Getting a request for a manuscript produced the first high, followed by the far greater one of being offered a book contract. But next, would come the anticipation of the first review.

During the weeks I waited for that first review, I imagined both extremes. Sometimes, it was a scathing rebuke: “What right do you have to call yourself an author? Burn the book! Amputate your fingers!” Other times, I allowed my fantasies to take upward flight: “A brilliant new author! Every word, every sentence is perfection!” Of course, I doubt even reviews of Dickens’ works were ever so gushing in praise. So, I continued waiting, wondering, hoping…

The first review finally came in, a couple of weeks ago (and now has been posted by the reviewer). I called my wife as soon as my publisher sent the review, wanting to share it (good or bad) with her, before reading it myself. I got her on the phone and began reading it, slowly, carefully…

You can read the review yourself, by accessing the link below, and you may be able to imagine my wife’s and my reaction.