And Now, the Journey Begins! 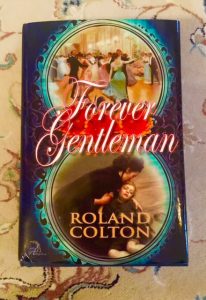 My Book Journey — The Book Release!

Today is a much anticipated day in our household–the release date of my debut novel, Forever Gentleman. It’s been nine months since I was offered a book contract for my manuscript and today’s date has been circled on our calendar since earlier this year when the publisher scheduled the book’s release.

Beginning today, booksellers will start shipping books to those dear readers who have pre-ordered the book. Soon after, I expect some of my readers to begin posting reviews on sites such as Amazon.com, BarnesandNoble.com and others. Readers will be able to decide how many stars the book merits and share their opinion of the book.

When the release date for the book was scheduled by the publisher, my family and I knew that we would be in France at our summer home. We considered whether to delay the release until our return in August, but my book publicist recommended otherwise. She suggested that we begin with a “blogging tour,” trying to create interest for the book online and obtain additional reviews from bloggers who could then spread the word to their members. Thus far, my publicist has contacted more than a hundred bloggers, some of whom have requested a copy of the book and others who have asked for blog interviews. Not being terribly proficient at social media, it has been extremely interesting to see how the process works. Much has changed since I finished my initial draft of the book several years ago.

How It All Began

It was approximately four years ago that I finished my very first draft of the story, under the original title of “Delicious Deception.” The original plot was pretty consistent with the final edition being released today, but the first draft didn’t have near the character development nor other embellishments (and subplots) which I believe make the book much better. At the time, I had shared the manuscript with just a few close friends, receiving positive reviews. My lovely wife had not been among those who had read the manuscript, since she is not a reader of fiction. Thus, I always assumed that she would have to wait for the movie version (you can see how confident I am) to be released in order to experience the full story. 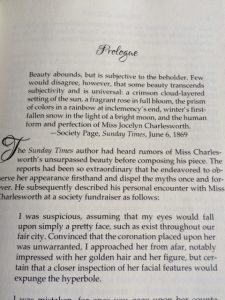 One night four years ago, as we retired for bed, my wife surprised me by asking me to read to her the first few pages of my manuscript. I had mixed emotions about doing so, believing that my fragile writer’s ego might be bruised, since she never shies from sharing her true opinions. Nevertheless, I took the bold step of reading the opening lines, which are nearly identical to the quote from the Sunday Times that you see in the Prologue of my book today. She stayed awake through the first lengthy paragraph, which discusses universal beauty. That was a good sign! It had been a long day and I knew my wife was tired, which meant that she would probably succumb to sleep in a matter of minutes. Seeing she was still awake, I continued on, reading a few more paragraphs.

Now, understand that my wife loves the sound of my voice (which is a good thing), but in the late evenings she finds it so soothing that it will often put her to sleep. After the first page, I asked her if she wanted to hear more. She said quietly, “Keep reading.” I continued and soon the Prologue was done. I suggested we go to bed. She said, “No, I want to hear more.” So I continued reading Chapter 1 where the lead character, Nathan Sinclair, is introduced and meets a woman of great beauty, Jocelyn Charlesworth. As each page turned, my wife remained awake, until the first chapter was done. Her last comment before going to sleep was, “It’s nice.”

Her comment gave me a warm feeling, but I doubted she would want me to continue the following night. To my surprise, as we retired for bed, she asked me to continue with Chapter 2. As she listened, her back was turned to me. After reading the first couple of pages, I stopped, assuming that she had fallen asleep. Then I heard her soft voice, “Don’t stop.” I continued reading a few more pages, now certain that she was surely asleep. I paused again. After a few seconds, she asked “Why did you stop?” I continued reading until Chapter 2 was done and the lights were turned off.

Each succeeding night, she asked for another chapter, sometimes two. I felt like the heroine in Arabian Nights, who stopped each night at a cliff-hanger, to prolong her life one more day. One night she gave me the ultimate compliment when she said: “Each day, I look forward to the night when I will hear the next chapter. I’m enjoying it more than a PBS mini-series.”

And so, I continued reading until the book was completed. In fact, she asked me to allow some of her friends to read the book (something that had never happened before), and I dutifully offered her closest friends the manuscript. She seemed more impatient than I to hear their thoughts after their reading was finished. Before we had never discussed the book being published, now she was encouraging me to send out queries to agents and publishers.

Book Review are Coming In!

We’ve come a long way since. She was at my side when the publisher requested the manuscript and when the book contract was offered. She heard me read our third book review a few days ago just after it was posted by Heather Osborne of Reader’s Favorite on Goodreads, an organization with 50,000,000 members. You can imagine her and my thrill when we first saw the “Five Star” designation before reading the review. I hope you will read the review from the link below, so you can appreciate how we savored each word from Heather’s review:

Perhaps now, many of you—friends, family, acquaintances and even patients of my wife’s practice–may better understand her enthusiasm for the book and delight in spreading the word to all those she meets… and, her delight at seeing one journey ending, and another beginning. I’m looking forward to meeting many of you at upcoming book signings and readings, with an occasional concert thrown in. Upon our return from France next month, the real work begins.